Texel offers another candidate for a hydrogen based battery - TEXEL

Texel offers another candidate for a hydrogen based battery

Texel participates in the podcast Göteborgspodden 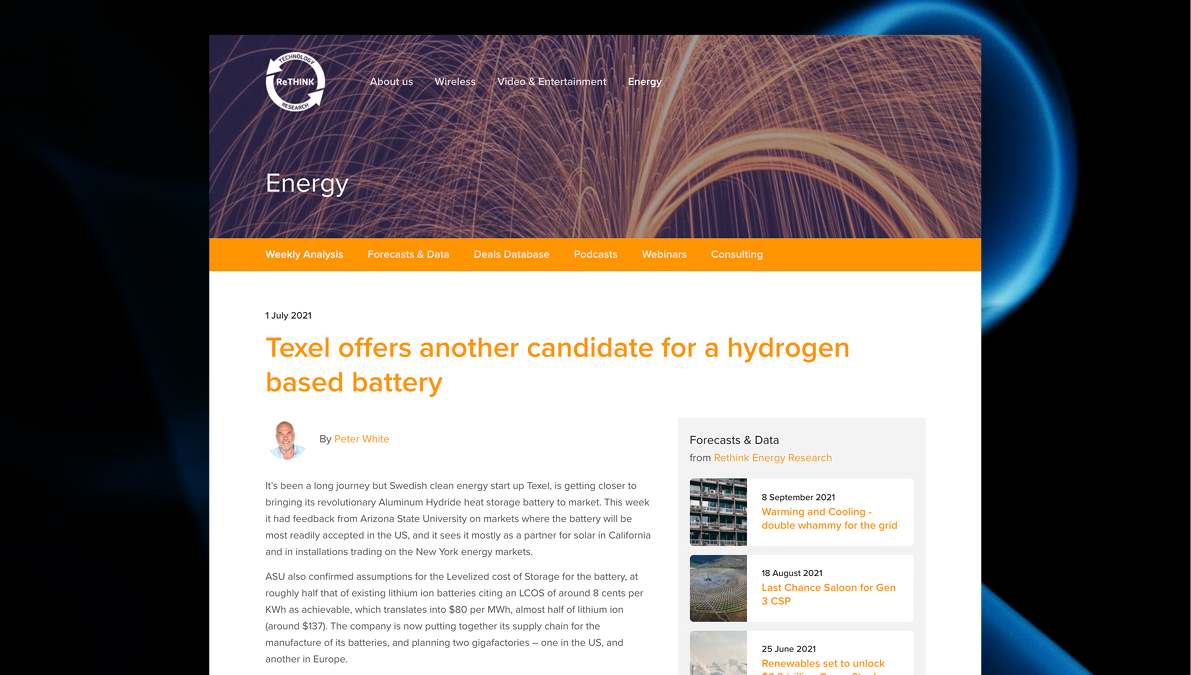 It’s been a long journey but Swedish clean energy start up Texel, is getting closer to bringing its revolutionary Aluminum Hydride heat storage battery to market. This week it had feedback from Arizona State University on markets where the battery will be most readily accepted in the US, and it sees it mostly as a partner for solar in California and in installations trading on the New York energy markets.

ASU also confirmed assumptions for the Levelized cost of Storage for the battery, at roughly half that of existing lithium ion batteries citing an LCOS of around 8 cents per KWh as achievable, which translates into $80 per MWh, almost half of lithium ion (around $137). The company is now putting together its supply chain for the manufacture of its batteries, and planning two gigafactories – one in the US, and another in Europe.

The ASU report also highlights an opportunity to play in the Power Purchase Agreement market when coupled with solar generation citing a 4-hour lithium-ion storage plus solar PPA currently yielding a blended LCOE of $43 per MWh, whereas one using this technology could offer $26 per MWh.

Last week leaked negotiations led to European papers suggesting that the company’s first 36GWh factory would be based in Malmo in Sweden and provide 5,000 jobs – we spoke this week to CEO Lars Jacobsson, who assured us that as yet no decision had been taken, “it could even be in the UK,” he said. He did admit to being in discussions with Sweden’s Höganäs, the world’s largest manufacturer of powered metals, about getting it onboard as a supplier and possibly as an investor. Höganäs powered metals are used for molding engine blocks and other ICE car components, and will be looking for new businesses top enter as EVs take over.

The technology has a long history, starting out at the Savannah River National Laboratory in US in around 2012, based on the capabilities of aluminum hydrides, and other alloys, which had been used as an alternative heat storage source for Concentrated Solar Power.

The lab developed this approach because hydride materials offer very dense sources to store thermal energy while being inexpensive and rechargeable without degradation in storage capacity. The technology relies on heat at 800°C being applied to metal hydrides, which breaks the bonds with hydrogen and separates them into gas and metal, which can then be stored in separate containers. A small amount of heat (say 40°C) is used to expand the hydrogen and trigger the creation of hydrides all over again, giving off the same 800°C of heat from the original reaction. The same process is used to store hydrogen for some fuel cells, inside metal hydrides.

This heat can either be delivered as heat, or used to drive one of the most efficient Stirling engines ever built, licensed exclusively from Ford which was built under contract for the US Department of Energy, in which case it would generate electricity fairly efficiently.

Jacobsson told us that, “This battery has no degradation, no rare earth metals, and can be 100% recycled. We have three prototypes in a number of different areas around the world, one in Perth Australia, another in Europe, and one in the US. We are still looking for funding for manufacturing, but once we have firm orders from utility customers, we are confident that funding will be found.”

We took a few guesses at how much he needs, and while Jacobsson did not answer us directly, he laughed and said “Not the €4 billion that Northvolt needed to build a tiny 4GWh factory, and we will build one factory here in Europe and another in the US.”

“Is it €1 billion per factory?” we asked, “Slightly more,” was the closest he would go.

The company was previously called United Sun Systems (USS), and acquired the rights out of bankruptcy of Stirling Energy Systems back in 2012 before renaming itself Texel.

Last week Rethink Energy covered EnerVenue, a company sporting a nickel hydrogen battery that seems to work in a very similar manner. In that application the challenge was to change 1970s technology used by NASA on its space program and eliminate the pure platinum catalyst that the reaction required. Like this invention, EnerVenue pointed out that 30,000 re-charge cycles was a feature of its design, far more than lithium ion’s 3,000 or so. So everyone is working on a better way to do what the lithium ion battery is doing, but better and cheaper.

“I believe very much in lithium ion,” said Jacobsson, “it will certainly be used in EVs and be with us for a while, but there are cost issues and mining issues with lithium cathodes, and the those will not go away and so we believe there is room for more technologies in this market.”

Despite operating at 800°C of heat internally, this battery will not suffer thermal runaway, it won’t decay after a few thousand charge-recharge cycles, it should have an anticipated lifetime of 40 years, and once it begins to gain economies-of-scale from volume production, it’s costs could go considerably lower than ASU has forecast.

Unlike EnerVenue, Jacobsson claims that this technology is actually more dense than lithium ion batteries, so it could generate more power for a given weight. However he has no plans to chase the Electric Vehicle market, although may look to form factors which can be used in homes and smaller businesses. AlH3 is supposed to contain as much as 10% hydrogen by weight, offering significant energy density.